Canada has lost a rock-n-roll pioneer with the passing of Jack Scott. 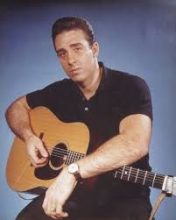 Scott has four singles on the Billboard top 10 in the U.S in the late 50s and early 60s.

His Facebook page says he died yesterday at the age of 83 although no cause or location was given.

Scott released several albums from 1959 to 1964 and was rewarded with an induction into the Canadian Songwriters Hall of Fame in 2011.