Prime Minister Boris Johnson’s Conservative Party has won a thumping majority in Britain’s Parliament; a decisive outcome to a Brexit-dominated election that should allow Johnson to fulfill his plan to take the U.K. out of the European Union by January 31st. 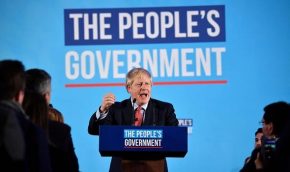 With 648 of the 650 results declared on Friday, the Conservatives had 363 seats and the main opposition Labour Party 203.

The victory makes Johnson the most electorally successful Conservative leader since Margaret Thatcher, another politician who was loved and loathed in almost equal measure.

It was a disaster for left-wing Labour Leader Jeremy Corbyn, who faced calls for his resignation even as the results rolled in.

Meantime, the Scottish National Party won almost 50 of Scotland’s 59 seats, up from 35 in 2017, a result that will embolden its demands for a new referendum on Scottish independence.