IS IT TIME TO DO AWAY WITH THE NICKEL? MOST CANADIANS SAY IT SHOULD STAY FOR NOW

It’s been seven years since Canada decided to eliminate the penny. Now there’s talk of doing away with the nickel as well. 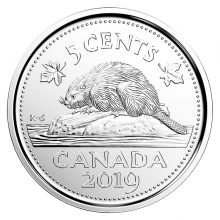 According to an online poll by Vancouver-based Research Co., more than a third of Canadians agree we should abandon the five cent coin while more than half disagree.

But responses also vary by age.

It was about three years ago the Trudeau Liberals looked into the idea of eliminating the nickel after a prediction by Desjardins “that due to the gradual increase in the cost of living and decreased buying power of small coins, the time will come when the nickel will have to be taken out of circulation.”

To date, there are no concrete plans to eliminate the five cent coin.