There is now evidence of a direct correlation between increased traffic deaths and fewer enforcement officers on the roads. 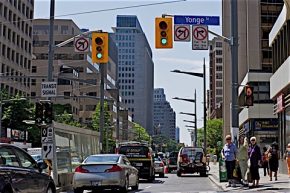 Provincial data analysed by the Toronto Star reveals that Toronto Police issued roughly 234,000 fewer tickets last year than in 2009; a much steeper decline in both number and percentage than for any other police service in the GTA and Hamilton.

In fact, the drop has been stark with roughly 140,000 fewer speeding tickets issued last year than a decade earlier, 44 percent fewer careless driving charges and a 7000 ticket drop in charges for making an unsafe left turn at an intersection.

At the same time, there have been significantly more collisions and deaths on city streets, a number that has increased steadily in the last seven years, with 2018 marking the highest total since the early 2000s. Last year also saw the most pedestrians and cyclists killed in the city since at least 2005.

The analysis of the data comes weeks after the Toronto Police Service confirmed its officers have ticketed far fewer drivers in recent years. Police Chief Mark Saunders used this information last month in a successful bid to reinstate a dedicated traffic enforcement squad which was disbanded last year.