USMCA COULD BE NEARING COMPLETION, AS FREELAND JETS TO MEXICO CITY

The new North American free-trade agreement could be getting closer to finalization. 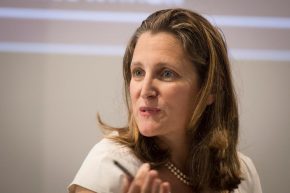 Canada’s Deputy Prime Minister Chrystia Freeland is to meet with American and Mexican representatives in Mexico City Tuesday, amid reports a deal to revise the United States Mexico Canada Agreement is close to completion.

U.S. ratification has been stalled for months as congressional Democrats and organized labour have bickered with Mexico negotiators over labour rights and the treatment of steel and aluminium.

According to Justin Trudeau’s office, the Prime Minister and U.S. President Donald Trump talked directly about the deal on Monday.

Trump spoke publicly about the pending deal, saying he’s “hearing very good things including from unions and others.”