One of only five portraits of Wolfgang Amadeus Mozart, painted during his lifetime, has sold for more than 4 million dollars at a Paris auction. 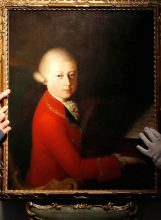 This one shows the Austrian musical prodigy playing a harpsichord during a tour of Italy in January 1770 when he was approximately 13 years of age.

The composer and his father were staying in Verona when it was painted.

The portrait intrigues scholars because it shows an entire composition in front of Mozart which only exists in the painting – not as a manuscript.

The score is marked “molto allegro” (very quick) and is now known as “Allegro of Verona, KV72a in G Major.”

Some musicologists say it could have been composed by Mozart, but others say the style is that of a Venetian composer.