One of the candidates vying for leadership of the Ontario Liberal Party has a big idea for how to improve public transit: make it free to ride. 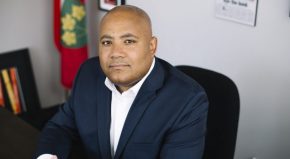 Michael Coteau is the MPP for Don Valley East and frames his proposal as a visionary one which would dramatically increase transit usage and help address two of the biggest challenges facing modern cities; traffic congestion and greenhouse gas emissions.

It may sound radical, but the idea of eliminating transit fares is not new.

In the run up to the October federal election, the New Democrats released a platform that included a pledge to work with municipalities and provinces to institute free transit.

And last year, Toronto mayoral candidate Saron Gebresellassi ran on a promise to eliminate TTC fares, arguing transit should be considered a right like healthcare or education.

Michael Coteau is one of 3 prominent names running for the Liberal Leadership, in addition to former Liberal MPP Steven Del Duca and current MPP Mitzie Hunter.

The deadline for candidates to enter the Liberal leadership race is Monday at 5pm.