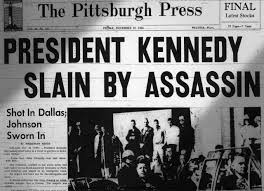 Kennedy was shot and killed while his motorcade was driving in downtown Dallas, Texas on November 22, 1963.

After being rushed to a nearby hospital, Kennedy was declared dead 30 minutes after being struck.

Vice President Lyndon Johnson was sworn in to take Kennedy’s place. Kennedy’s wife, Jacqueline Kennedy, was alongside and still dressed in the suit she wore when sitting next to her husband. It still had some of her husband’s blood on it.

The scene of the assassination at Dealey Plaza is marked with two Xs for the spots where the two bullets struck the President. The Texas Book Depository, where suspect Lee Harvey Oswald allegedly fired the fatal shots, is now a museum that looks at the history of the Kennedy Presidency, his assassination, the case against Oswald and the conspiracy theories that continue to this day.

Kennedy was 46-years-old when he was killed.