SOUR TOE COCKTAIL TO LIVE ON IN THE YUKON

His legend will live on inside a ceramic urn in the shape of a human toe enshrined above the bar at the Yukon’s Downtown Hotel in Dawson City.

That will be the final resting spot of Captain Dick Stevenson, the world famous inventor of the legendary Sour Toe Cocktail, the whisky drink that comes with the touch of a pickled human big toe. 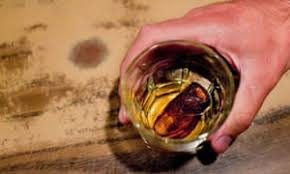 Stevenson’s daughter says his spirit will live on as long as Sour Toe Cocktails are being served.

Stevenson came up with the drink idea in 1973 after finding a frost-bitten human toe preserved in a jar in a cabin he bought.  He died last week at the age of 89.

His 10 toes will also kept at the bar along with his ashes.

In all some 93,000 customers have taken the challenge and become members of the Sour Toe Cocktail Club started by Stevenson.