TRUDEAU TO ANNOUNCE HIS CABINET PICKS THIS WEEK

Prime Minister Justin Trudeau will be announcing his cabinet picks this week, and one big question is what will he do with his ace foreign affairs minister, Chrystia Freeland. 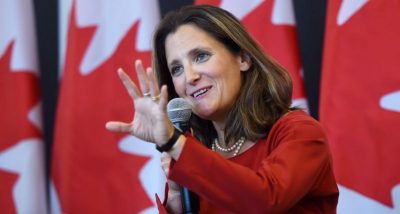 Experts say Freeland’s imprint on Canada’s foreign policy will remain visible for some time to come.

Trudeau is not giving away anything on what her future holds until he reveals his cabinet on Wednesday.

Freeland presided over the successful renegotiation of the North American free trade deal which has yet to be ratified.

She was also key in Canada joining the Lima Group, that pushes for democracy in Venezuela.