TREBEK FEELS THE LOVE ON JEOPARDY

The Canadian host of “Jeopardy” had an emotional moment on the TV show, when a contestant used his final Jeopardy answer to send Alex Trebek some support. 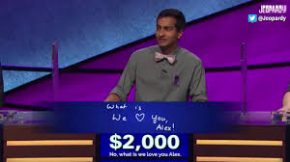 Right before that round, the 79-year old Sudbury-born host shared he was reentering treatment for pancreatic cancer.  He was diagnosed in March

Pancreatic cancer is often deadly and isn’t usually diagnosed until its later stages.