AN ERA ENDS IN BRITISH POLITICS

British politics just won’t be the same as the man who has ruled the House of Commons for the past ten years has shouted “order, order” for a final time. 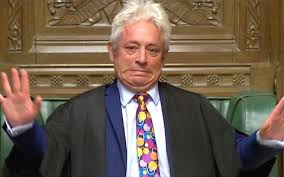 56-year old John Bercow ended his decade long reign as Commons Speaker Thursday.   He is also standing down as an MP

Bercow has been a somewhat contentious figure, with some MPs questioning his impartiality as various political leaders have tried to steer Brexit through the UK Parliament.

A new speaker will be chosen on Monday.