Talk about inspiration for other Zoomer women!

At the age of 63, Linda Hamilton is reprising her role as a trained warrior in Terminator: Dark Fate which opens in theatres this weekend. 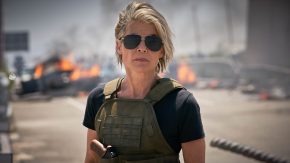 Hamilton, who is as buff as she was in the 1984 original when she was still in her 20s, says there was a lot of physical preparation for the reprisal of her role as Sarah Connor.

“A year without carbohydrates, I really put the time in, and then once we got into the actual work, the training, military training, stunt training, weapons, scuba, even Spanish lessons,” Hamilton recounts, “It was hard.”

And Hamilton says there was a village of people overseeing her training for the film.

Hamilton says there are not many 60-year-old professional athletes, so her trainer had to do a lot of research before her regimen began.

And while Hamilton is 63, her repeat co-star, Arnold Schwarzenegger, is 72.