He once urged his fans to “steal this book” now, radical counter culture icon and prankster Abbie Hoffman’s thousands of letters and other artifacts have been sold to the University of Texas at Austin. 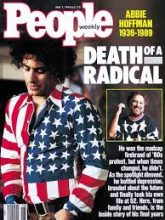 The trove of letters includes manuscripts, photographs, F.B.I. surveillance reports and thousands of other papers.

There are also notes and letters from other icons of the 1960s.  Among them, cards from John and Yoko, a letter from poet Allen Ginsberg offering to help Hoffman raise defense money and a plea by writer Norman Mailer to the governor of New York seeking executive leniency on Hoffman’s behalf.

Hoffman was a social activist, anarchist and leading proponent of the Flower Power movement.