FONDA ARRESTED FOR A THIRD TIME

Quite a busy weekend for Zoomer Legend Jane Fonda. 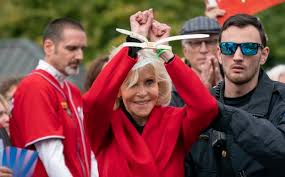 Not only was she arrested for the third time at a climate change protest in Washington D.C., she was presented with a BAFTA Award while being handcuffed.  She accepted the Stanley Kubrick Britannia Award for Excellence in Film as she was led away.

The 81-year old has moved to the U-S Capital for four months to take part in climate change protests calling it a crisis not just in North America, but all over the world.