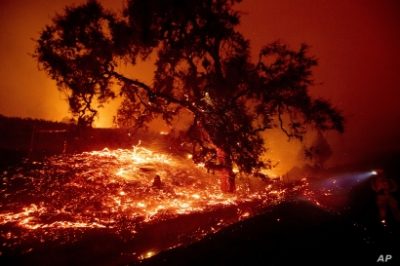 image courtesy of Voice of America

The utility says blackouts will begin around 2:00 p.m. Saturday in parts of 36 counties. About 940,000 customers and more than 2 million people will be affected.

It’s the third preventative shut-off in as many weeks amid concern that gusty winds could knock down power lines and spark fires.

Winds picking up Saturday night could gust to more than 137 kilometres per hour and make conditions extremely difficult for firefighters trying to tame a huge blaze in wine country.

Cal Fire says winds expected to whip up Saturday night could lead to erratic fire behaviour near the blaze that’s chewed through 104 square kilometres of dry brush and timber.

The entire communities of Healdsburg and Windsor have been ordered to leave.

The Sonoma County Sheriff’s Office says it is expected to be the biggest evacuation in the county in more than 25 years.