A new City of Toronto transit agreement with the Doug Ford Progressive Conservatives at Queen’s Park has been endorsed by members of the city’s executive committee. But Mayor John Tory is promising he will engage in community consultations after receiving a high volume of negative feedback from residents. 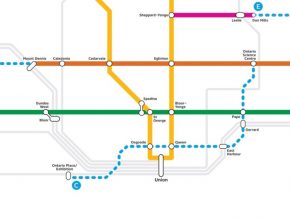 The deal, which scraps a plan for a TTC upload to the province in exchange for the mayor’s endorsement of Premier Ford’s Ontario Line, has many in Toronto’s Leslieville neighbourhood concerned, since the line would go right through their area of Gerrard and Carlaw.

“Trains would be going every 45 seconds. Three new tracks will be built if this new Ontario Line goes above ground, so they’re saying to the city, can you please intervene and tell Metrolinx the impact of the Ontario Line to this little section (of Toronto),” explained City Councillor Paula Fletcher who represents Leslieville residents.

The Ontario Line would go from the Ontario Science Centre south to East Harbour and then west to Ontario Place.

The project remains in the early planning stages but has a preliminary price tag of nearly $11-billion.

The deal goes to full city council next week.