Activists and a Syria war monitor says the Kurdish-led force and Turkey-backed fighters are clashing on the outskirts of Ras al-Ayn, a town along the border that is part of a cease-fire agreement.

The Rojava Information Center and the Britain-based Syrian Observatory for Human Rights reported fighting in villages on the western and eastern flanks of Ras al-Ayn. The Observatory says at least five people were killed and 14 injured. The Rojava Center said its activists on the ground reported advances by Turkey-backed forces on two villages.

Other activists reported a new exodus of civilians from the villages as fighting continued. A Kurdish fighter said there were attacks near the hospital in the centre of Ras al-Ayn. He spoke on condition of anonymity because he was not authorized to brief reporters.

The fighting comes despite a U.S.-brokered cease-fire that went into effect late Thursday.

Meantime, Turkey’s pro-government dominated media is hailing the U.S.-Turkish cease-fire deal in northeast Syria as a victory for Turkey’s president. 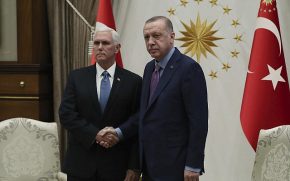 After hours of negotiations between Recep Tayyip Erdogan and U.S. Vice President Mike Pence, the two nations agreed to a five-day cease-fire in Turkey’s week long offensive against Kurdish fighters in northern Syria.

The agreement requires the Kurdish fighters to vacate a swath of territory inside Syria along the Turkish border. That arrangement would largely solidify the position Turkey has gained after ten days of fighting. The Kurds were U.S. allies in the fight against the Islamic State.

Yeni Safak newspaper’s banner headline on Friday hailed a “Great Victory.” It wrote; “Turkey got everything it wanted.”

Sabah newspaper’s headline read; “We won both on the field and on the (negotiating) table.”

Kurdish-led forces have invited the Syrian government’s military, backed by Russia, to deploy there to protect them from Turkey.