TORY: NOT MUCH CITY COULD DO TO PREVENT SCARBOROUGH HIT-AND-RUN

The City of Toronto is in the midst of its “Vision Zero 2.0” campaign that’s trying to cut down on the number of pedestrians and cyclists hit in the city. 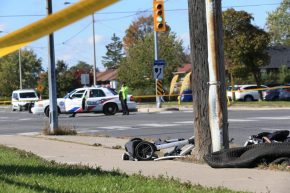 But mayor John Tory says there was nothing the city could do to prevent a weekend hit and run that seriously injured a toddler, his mother and grandmother in Scarborough.

It happened on Sunday morning at Ellesmere Road and Pharmacy Avenue.

“I’m not sure there’s anything we could have done as a city government that would have stopped somebody that’s driving in, let’s call it erratic circumstances,” said Tory. “I mean it was a tragedy and I’m glad everybody seems to be recovering but, in this case, it was not people crossing the street. They were standing on the curb.”

All three victims, aged 20-months, 37 years and 50 years, are expected to survive.

This afternoon, Toronto Police said they are seeking a warrant for the arrest of 35-year-old Derek Desousa.

He’s one of three people the police are seeking in the case.

They allege a grey SUV ran a red light and mounted the sidewalk before hitting the family that was waiting to cross.