Footage of the Fab Four, being interviewed in Cardiff Wales in 1965 has surfaced after half a century stored and forgotten in a bread tin. 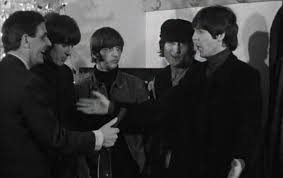 During the interview, John Lennon tells the interviewer that Paul McCartney has five children in Swansea and when asked about their future plans, now that they have all the money in the world, they break into a rendition of “There’s No Business Like Show Business.”

The footage was found during a house clearance in Cardiff and was valued at more than $12.000 but failed to sell at auction Tuesday when the bidding fell short of the reserve price.