It was the first time Liberal Leader Justin Trudeau faced his rivals directly in this federal election campaign, but it was Conservative Leader Andrew Scheer who spent the most time on the defensive during last night’s french-language debate in Montreal. 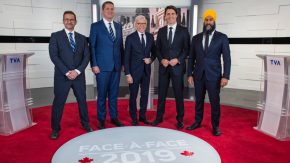 Scheer was pushed by the moderator and his 3 opponents into personally uncomfortable territory on abortion.

Scheer, a practicing Catholic, responded by saying it’s normal for Canadians to have different perspectives, but that he would oppose any measure to reopen the debate.

The leaders, including the Bloc Quebecois’ Yves-Francois Blanchet, also discussed the controversial Quebec secularism law, known as Bill 21, which bans some public sector employees from wearing religious symbols in the workplace.

NDP Leader Jagmeet Singh, who wears a turban as an expression of his Sikh faith, explained that as he supports the rights to abortion, same sex marriage and medical assistance in dying, he will defend these rights with all his strengths.

“There’s a challenge in the courts right now and I don’t want to interfere with that, but I really believe it’s the wrong way to go,” Singh told reporters after the debate, “and I’m going to put my effort towards where we can come together and hope that people can see me in Quebec as someone who loves the french language, loves the culture, and wants to defend the environment, wants to build greater bridges between Quebec and Canada and I want to show folks it’s the wrong way to go, to divide people based on the way they look.”

There are 2 English language debates next week, when all 6 party leaders will take part.