Classes will be held as usual Monday, but it is not a regular day for tens of thousands of education workers across Ontario.

Some 55,000 custodians, clerical workers and early childhood educators are beginning a work to rule campaign in most schools across the province.

Representatives with the Ontario government and CUPE negotiated on the weekend but were unable to reach a deal. 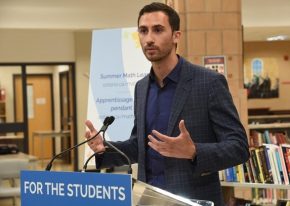 Education Minister Stephen Lecce says it’s “deeply disappointing” that the talks were unfruitful, and is reassuring parents that student safety is the government’s priority during the work-to-rule campaign.

CUPE’s Laura Walton explains why the work to rule is the next course of action.

“We need to have commitments made to maintain and improve the service levels,” Walton outlines, “We can’t have parents telling us that there’s no one to get their kids off the bus. We can’t have students without having libraries, which are safe spaces available to them during lunch hours. We can’t have situations where schools are no longer available for community use because the government has cutting that funding as well.”

Contracts for Ontario’s public school teachers and education workers expired August 31st, and negotiators for multiple unions are in various stages of bargaining.