Due to the spillover effects of a strike by GM workers in the U.S., General Motors Canada halted more production at the plant in Oshawa. 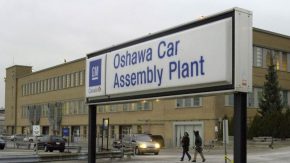 It ceased all vehicle production Friday, idling its flex line that produces the Chevrolet Impala after stopping truck production on Tuesday.

The halt in production means about 1,850 unionized workers have been temporarily laid off with full pay.

The disruption is due to a parts shortage resulting from a strike by United Auto Workers members at all GM plants in the United States over issues including wages, health care, and job security.