Major Canadian cities like Vancouver and Montreal have already joined the call for greater action on climate change by declaring a climate emergency. 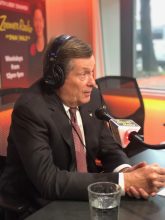 Mayor John Tory says he’ll lead the call for city council to issue a declaration for a climate emergency. Tory says the matter will be up for discussion at the city council meeting early next month.

“I think the declaration of the climate emergency is to put an exclamation mark on the fact that we are seeing in Toronto, just like everywhere else, these storms that are of a magnitude we can hardly imagine, the damage that they’re doing and a variety of other things that are happening to the natural environment,” said Tory today.

“Toronto is joining some 800 other communities and saying this is something requiring very urgent attention by us all. That is what we intend to continue doing as a city going forward.”

Rallies have been held around the world with people demanding action from their respective governments.

A Toronto climate strike is scheduled to be held in Friday at Queen’s Park.