NETANYAHU AND GANTZ TO FIGHT IT OUT IN TUESDAY'S ISRAEL ELECTION 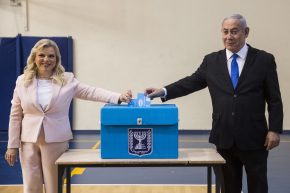 Netanyahu cast his vote on Tuesday in Jerusalem alongside his wife. He is seeking a fifth term against the prospect of a likely indictment on corruption charges.

He faces a stiff challenge from retired military chief Benny Gantz, whose centrist Blue and White party is running even with Netanyahu’s Likud. Both parties could struggle to form a majority coalition with smaller allies, forcing them into a potential unity government.

Netanyahu urged all citizens to cast their ballots and said of the election that “I can confirm to you this morning that they are very close.”

It’s the second election this year, after Netanyahu failed to build a coalition following April’s vote and dissolved parliament.

Meantime, the potential kingmaker of the Israeli election says he will insist upon a unity government between the two largest factions.

Avigdor Lieberman cast his vote in his settlement of Nokdim Tuesday.