A U-S Supreme Court Justice, a veteran Zoomer Actress and a famed women’s rights lawyer were inducted into the U-S Women’s Hall of Fame over the weekend. 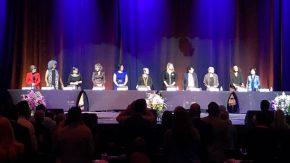 The Class of 2019 also included activist Angela Davis, fashion designer Diane von Furstenberg, composer Laurie Spiegel and molecular biologist Flossie Wong-Staal for her work that helped prove that HIV is the cause of AIDS.

The inductees were celebrated at a ceremony in Seneca Falls, New York.