The photographer, who captured that picture of the lone man, standing in front of tanks in  Beijing’s Tiananmen Square during pro-democracy protests in 1989, has died. 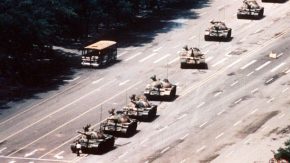 The “Tankman” photo went on to win the 1990 World Press Photo of the Year.

Charlie Cole, shot the picture the day after hundreds and possibly thousands of people died when Chinese troops moved in and opened fire.

He took the picture for Newsweek with a telephoto lens from the balcony of a hotel, framing it so the man was only just in the bottom left corner.  He said later he knew he would be searched by Chinese security so he hid the film and shortly after that officials broke through the door and searched but couldn’t find it.

Cole had been living in Bali, Indonesia. He was 64.