SCHEER STAYS THE COURSE AGAINST TRUDEAU, WHILE MAY AND SINGH FOCUS ATTACKS ON SCHEER

Andrew Scheer stayed on message against an absent Justin Trudeau and for the most part did not defend himself against the attacks of his opponents NDP Leader Jagmeet Singh and Green Party Leader Elizabeth May. 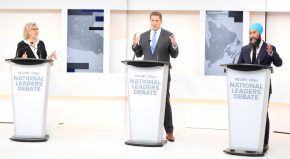 The Conservative leader appeared to be all business in the first televised leaders debate hosted by Maclean’s and City TV in Toronto ahead of the October 21st election.

“By getting back to balanced budgets, we can lower taxes, put more money in your pocket so that you can get ahead,” Scheer told viewers, “That is what this election is all about. Who do you trust to make life more affordable and help you get ahead?”

Scheer was alone in his approach, with both May and Singh in favour of investing in more services for Canadians.

“When Conservatives talk about cuts to taxes, they’re going to cut services. That’s exactly what they do,” claimed Singh, “Here in Ontario, people have felt it. They felt the cuts. Those who are most vulnerable are seeing their services cut.”

“We need to massively expand services, we need 100-percent universal pharmacare. Jagmeet’s right. We have to bring in pharmacare. We’re the only country that has universal healthcare that doesn’t have pharmacare,” said May, “We need to eliminate tuition so our kids can get a good start, or at any age, improve your education.”

Scheer let many of these exchanges hang, likely understanding that May and Singh could steal votes from Liberal Leader Justin Trudeau, which would benefit him in his bid to become prime minister.

An empty podium was on stage for Trudeau, who told reporters in Edmonton, there is plenty of time for him to debate his opponents in three other debates.

Trudeau told a rally in Edmonton Thursday night the Liberals have invested in local oil and gas workers and women and men in skilled trades.