Effective Tuesday morning, the writ will drop and the 2019 federal election will be underway. 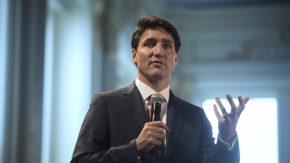 Prime Minister Justin Trudeau is expected to visit Governor General Julie Payette around 10am to officially ask for Parliament to dissolve with an election date set for Oct. 21.

It’s been a long time time as the fixed election date meant there was little mystery coming. Trudeau has until Sunday to get the campaign underway.

The governing Liberals have made plenty of funding announcements over the last few weeks as is the custom for parties in power ahead of the writ being dropped. Opposition parties, meanwhile have been getting their own campaigns underway.

The slogans were announced by the parties over the last few weeks. NDP leader Jagmeet Singh kicked off his campaign over the weekend in Toronto while Conservative leader Andrew Scheer launches his on Tuesday.

The Greens, meanwhile, are making hoping this is finally the time they can be launched into the wider national conversation. They’ve been challenging the NDP for third place in many polls.