BIANCA IS THE TOAST OF NEW YORK

The new world No. 5 tennis player continues to make the media rounds and revel in being the first Canadian to win a Grand Slam. 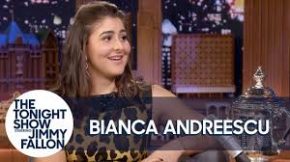 19-year old Mississauga native Bianca Andreescu has become the toast of New York after winning the U-S Open there on Saturday.

Last night she guested with Jimmy Fallon on The Tonight Show saying she’d heard from Toronto’s Mayor, music superstar Shania Twain, the Raptors and the Leafs, but for some reason, crickets from Toronto music start Drake.

When she does make it back to the GTA, she’ll come home to a hero’s welcome.  The Mayor and council of Mississauga are working out the details on a parade, a street naming, the key to the city or all three.