Hong Kong’s leader, Carrie Lam, formally withdrew an extradition bill today that has sparked month of protests and plunged the territory into its biggest political crisis in decades. 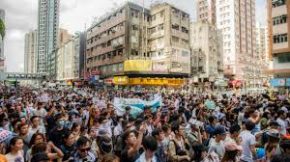 In a five-minute television address this morning Lam said the government will formally withdraw the bill in order to fully allay public concerns.

The extradition bill would have allowed Hong Kong residents to be sent to mainland China for trials and sparked massive, increasingly violent protests.