Zoomer legend Julie Andrews has been honoured by the Venice Film Festival for Lifetime Achievement. 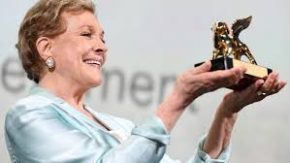 Andrews says she’s been blessed to have been the star of such much-loved movies as “The Sound of Music” and “Mary Poppins.”

The 83-year-old actress won an Oscar in 1965 for playing Poppins and received a ten minute standing ovation after accepting the Golden Lion award (above) in Venice.