What would you do if you found a bundle of 90-letters that your mother wrote to your father during World War II? 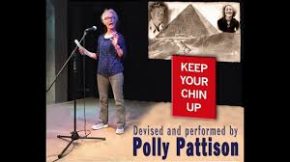 A 77 year old British woman has turned them into a play called “Keep Your Chin Up.”

Polly Pattison discovered the hoard of letters four years ago and through the letters her mother sent her father who was serving in North Africa gained a much keener insight into what her mother faced during the war.

Pattison’s show about life on the home front has been winning audiences at the Edinburgh Fringe Festival which runs until August 26th.