SOBEYS TO PHASE OUT PLASTIC SHOPPING BAGS BY FEBRUARY

Sobeys is going old school, telling customers they will soon need to bring their own bags or take their purchases home in paper bags. 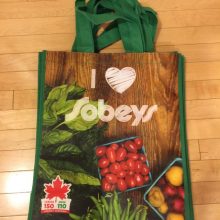 The chain is moving to phase out plastic bags by February.

The grocer’s owner Empire Co. will roll out the initiative at its other banners, including Safeway and Foodland, soon after.

Sobeys says it is making the move to phase out plastic bags as a response to calls from customers and employees to use less plastic.

Canadians go through hundreds of millions of single-use plastic bags at grocery stores each year, but chains are facing pressure to change their plastic-centric packaging from increasingly eco-conscious consumers.

Restaurants have responded to pressure to eliminate straws after a video showing someone removing a straw stuck up a turtle’s nose went viral.

Prime Minister Justin Trudeau has announced a single use plastics ban, to go into effect in Canada as early as 2021.