After finding it hard to maintain a green and weed free front lawn at her home, a Scarborough woman turned to artificial turf three years ago to keep the lawn neat and evergreen, even winning a “Beautiful Front Lawn Garden Award” from the last year. 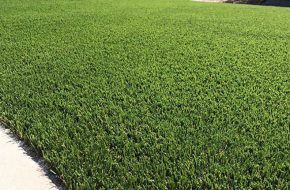 However, Sangeeta Gounder now faces a $1400 dollar fine if she doesn’t have it removed.

That’s due to a bylaw which dictates at least 75% of a house’s front yard must be soft landscaping.

Gounder received the bylaw infraction notice after someone complained to the city, who it turn voiced concern about drainage due to the artificial nature of the turf.

Although she’s disappointed, Gounder plans to comply with the bylaw to avoid hefty fines and charges, though she’d like to see the city reconsider its stance.