KAWHI PRIZES HIS TIME IN TORONTO

It’s been three weeks since Raptors faithful learned that superstar Kawhi Leonard was forsaking Toronto for the LA Clippers. 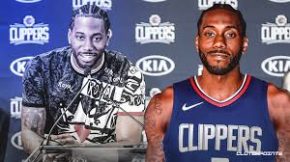 Yesterday, he was introduced to Clipper’s fans and spent the first few minutes of his talk saluting Toronto, its people, its food and the Raptor’s organization for an amazing season.

Leonard spent just one season in Toronto and was named Finals M-V-P after helping the Raptors win their first N-B-A championship in June.