TRUMP DENIES HE ENCOURAGED SUPPORTERS TO CHANT "SEND HER BACK"

U.S. President Donald Trump says he tried to stop supporters from chanting “send her back” at a Wednesday night rally, when he questioned the loyalty of a Somali-born congresswoman, although video of the event suggests otherwise.

The target of the taunt, Democratic Representative Ilhan Omar of Minnesota, says she believes the president is a “fascist” calling his policies a nightmare. 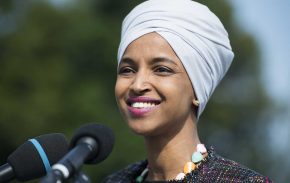 “Nothing this president says should be taken to heart,” Omar explained, “We are Americans as much as everyone else. This is our country and we are where we belong.”

Trump has come under intense criticism for his repeated attacks against four women of colour in Congress, initially tweeting on Sunday that they could “go back” to their native countries if they were unhappy.

All are American citizens, and three were born in the U.S., with Omar coming to the country as a child with her family from Somalia.