It’s face value is 100-dollars, but it’ll cost you upwards of a million to own. 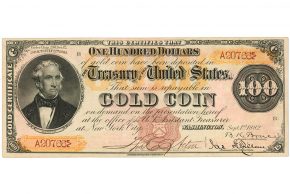 This particular Gold Certificate is the only one known to exist in private hands. There are two others still in existence, but they’re held by the Federal Reserve Banks of New York and San Francisco.

The certificate goes to auction at the American Numismatic Association’s World’s Fair of Money, August 16th in Chicago.