ANOTHER LIGHT EXTINGUISHED ON BROADWAY

Broadway has lost another leading light with the death of Tony award wining Lyricist Martin Charnin. 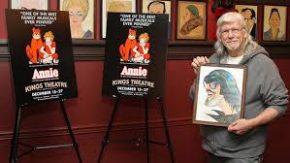 He was best known for his work on the musical “Annie.”

Charnin began his theatrical career as a performer, appearing as “Big Deal,” one of the Jets in the original production of “West Side Story.” He played that role for a 1,000 performances on Broadway and on the road.

He won won a Tony Award for Best Original Score for “Annie”.