Residents of a not-for-profit seniors home in Toronto’s Rosedale neighbourhood have been told they will need to find somewhere else to live by the end of the year. 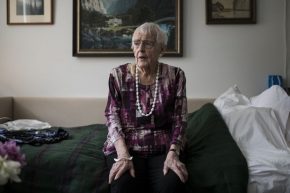 The building at 877 Yonge Street was sold to a numbered company connected to a Toronto real estate development lawyer two months ago.

A letter dated July 3rd was sent to residents at Davenhill Senior Living from the chair of Davenhill’s board of directors. It says the decision was made “only after it became clear that closure of the facility is inevitable” but did not specify why the building was closing.

87 year old retired teacher Anne Washington is among the 150 residents and says seniors’ accommodation in downtown Toronto is as scarce as hen’s teeth.

A spokesperson for Davenhill says relocation consultants have been hired to help seniors find new accommodation, tour prospective residences, pack and move, at no cost to the residents.

Councillor Mike Layton says the not for profit which operates the home is following requirements and the city does not have recourse to intervene.

City of Toronto staff have not yet received any planning or development applications for the site.