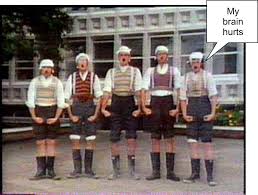 The recently Knighted Sir Michael Palin will act as executive producer of the shows that will air in September on the BBC and will feature “never-before-released material from the Monty Python sound archives”.

The Python anniversary will also be marked by a month-long event at the British Film Institute in London.

On the actual anniversary, October 5th, organizers hope to stage the largest gathering ever of people dressed as Gumbys – the spectacle-wearing, knotted handkerchief-sporting imbeciles who became part of Python lore.