Former Toronto councilor and two time mayoral candidate Anne Johnston has died at the age of 86. 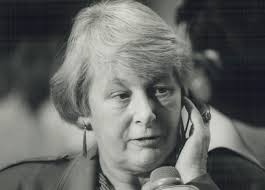 Johnston was first elected in 1972 and served until 2003.  She was known as a progressive voice on council.  She also chaired the Toronto Seniors’ Assembly and served as the group’s Seniors’ Advocate.

The Anne Johnston Health Station at Yonge and Montgomery is named after her.