An independent GTA MP, who is not running for re-election in October, has fired a parting shot; a private member’s bill which says qualified black Canadians are being passed over for promotions to senior positions in the federal government. 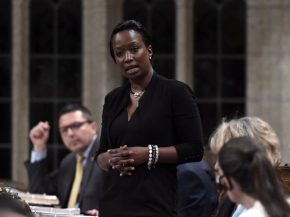 Celina Caesar-Chavannes, who is black herself, says it is due to systemic racial barriers.

The Whitby MP says in all of Canada’s history no black person has been appointed as a federal deputy minister, the bureaucratic head of a department.

That’s in part why she’s tabled a private member’s bill which will die on the order paper once the election writ is dropped, as will any other bills left unpassed.

But she hopes another member of parliament will take up the cause and reintroduce it when Parliament convenes after the election.

A spokesperson for Canada’s Heritage and Multiculturalism Minister acknowledges that many Canadians still face racism and discrimination, including anti-black racism.