MISSING MARILYN MYSTERY MAY HAVE BEEN SOLVED

The mystery of the missing Marilyn may be a step closer to being solved. 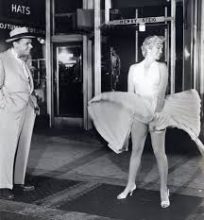 It turns out, the man convicted of vandalizing Donald Trump’s star on the Hollywood Walk of Fame last summer, has been arrested for stealing a statue of Marilyn Monroe from a nearby monument.

Police say 25-year old Austin Clay was identified from surveillance footage. When they discovered he was on probation for the Trump incident they searched his home and say they they found evidence linking him to the theft.

The statue, showing Monroe in her famous flying skirt pose from the 1955 film “The Seven Year Itch,” has yet to be found.

However, Marilyn’s 1956 black and white Magnavox TV can be found on display at the MZ Television Museum and Archive at the Zoomerplex in Toronto’s Liberty Village.