SAINT-JACQUES TO RETURN TO EARTH

Canadian Astronaut David Saint-Jacques is packing today for his trip home from the International Space Station. 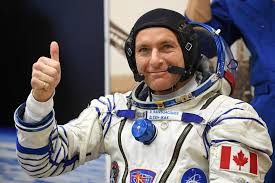 The 49-year old from Quebec City is coming back to earth aboard a Russian Soyuz capsule along with NASA astronaut Anne McClain and Russian cosmonaut Oleg Kononenko. They’re expected to touch down just before 11 o’clock tonight.

Gilles Leclerc of the Canadian Space Agency says after 6 months in space, Saint-Jacques will need some recovery time and will have to re-learn to operate in earth’s gravity after being weightless for so long.

When completed, Saint-Jacques’ mission will be the longest single spaceflight by a Canadian at 204 days in orbit.

During that time he’s walked in space for six-and-a-half hours and performed a so called “cosmic catch” by grabbing a supply ship with the Canadarm-2. He also oversaw numerous health science experiments and chatted from space with school students from cross Canada.