Premier Doug Ford’s former chief of staff, who resigned last Friday, will no longer be involved in party’s efforts to get re-elected in three years time. 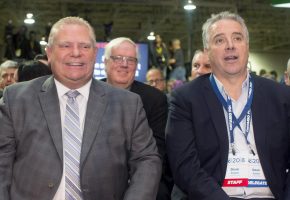 It’s not clear however whether French is stepping down from these roles of his own accord.

Meanwhile French was back at Queen’s Park for a transition meeting on Monday morning where it’s reported he received a standing ovation.

He resigned Friday amid a controversy of patronage appointments.