PREMIER AMONG FRIENDS AT FORD FEST

Premier Doug Ford was in a comfortable environment at his annual Ford Fest barbeque last night. 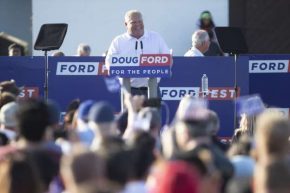 Ford shrugged off a week that saw him booed by 100,000 people on Monday at the Raptors victory celebration in downtown Toronto and the departure of his chief of staff Dean French.

Organizers say an estimated 10,000 people came out for the annual event. Ford spoke and stuck to some pretty common themes in his address.

“Those who will stop at nothing to bring us down–we know that when they come at us, you are with us and that is all that matters,” said Ford.

Ford talked about “downtown insiders” and called journalists the “media party” saying they criticize him. Instead he listed his accomplishments. He took credit for the 190,000 jobs created in the province in the last year.

He was defiant that he is getting the province on track.

“We will not waver. We will stay the course. We won’t stop until the job is done.”