MOTIVE FOR DANFORTH SHOOTER MAY NEVER BE KNOWN 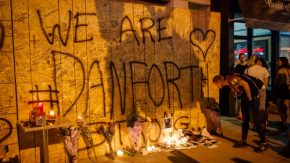 On July 22, 2019, Hussain killed 10-year-old Juliana Kozis and 18-year-old Reese Fallon and injured 13 others before turning the gun on himself.

In a press conference today, police painted the picture of a mentally disturbed man but stopped short from saying that led to the rampage.

“We sought to answer many questions in our investigation,” said Toronto Police Chief Mark Saunders. “The one question that the families and the public wanted to know is why. Although we’ve collected all of the evidence that was available to us for this crime, a crime where the shooter died at the scene, we may never know the answer to why.”

Police ruled out any involvement between Hussain and radical hate groups. They do say he had fascination with death and violence, a long history of mental-health issues and repeatedly harmed himself.

In their search of his room, police found handguns, magazines for an AK-47 assault rifle and extended capacity magazines loaded with ammunition.