ANYTHING I CAN DO TO HELP CANADA: TRUMP ON TRUDEAU'S REQUEST TO INTERVENE ON BEHALF OF DETAINED CANADIANS IN CHINA

The relationship between Prime Minister Justin Trudeau and U.S. President Donald Trump appears to be on solid footing, one year after Trump insulted Trudeau after leaving the G7 Summit in Quebec. 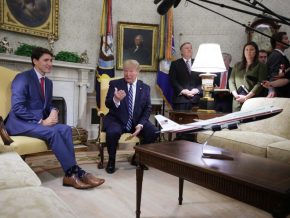 But Thursday, the U.S. President was statesman-like in welcoming Canada’s prime minister.

He told reporters he will raise the issue of the two Canadians detained in China when he meets with the Chinese president next week at the G20 Summit.

“Anything I can do to help Canada, I will be doing, at Justin’s request, I will absolutely,” Trump declared.

And despite his tough talk on tariffs and refusing to rule out using them in the future, Trump praised his North American neighbours for crafting an excellent new trade agreement.

Trudeau announced co-operation on a series of initiatives, including a new push to combat the opioid crisis in both countries.

They also agreed to speed up two previous plans to ease the flow of goods and people across the border, a new pre-clearance plan and a long-planned sharing of information on people entering and exiting the two countries will begin this summer.