Happy We The North Day, as proclaimed by Toronto Mayor John Tory!

The highlight of this special day to commemorate the Toronto Raptors as NBA Champions is the victory parade and championship rally.

Between 1.5 and 2 million people are expected to line the parade route, which begins at 10am at the Princes’ Gates and ends at Nathan Phillips Square for the rally at 12:30. 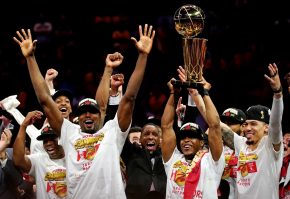 The Raptors will be travelling in open air buses with the Larry O’Brien Championship Trophy.

The rally will include a fly-by from the Royal Canadian Air Force’s Snowbirds demonstration team.

If you’re heading to the parade or the rally, you’re advised to take public transit.

The following road closures will be in effect as of 9am:

Bay Street between Dundas Street and Richmond Street West.
Queen Street West between Yonge Street and University Avenue.
Chestnut and Elizabeth Streets will be fully closed.
Armoury Street will have restricted access
Eastbound exit ramps from the Gardiner Expressway for Spadina and York-Bay-Yonge

A number of TTC routes will also be on diversion as a result of the festivities:

Go Transit said Sunday that all regular routes will be running Monday and Union Station will remain open.